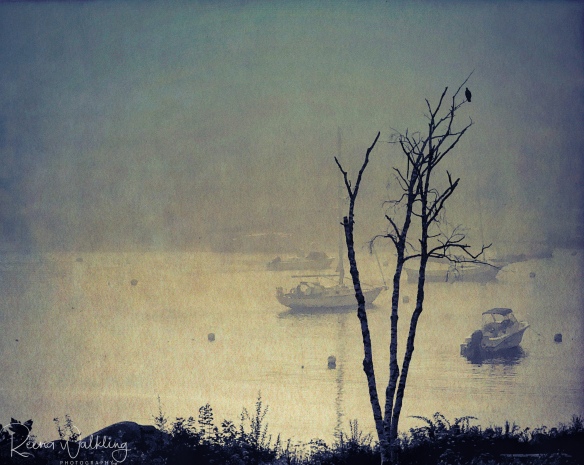 I was wondering how I would capture the theme ‘hard/soft’ until I happened on this image I took the other morning from our deck.  The fog or ‘sea smoke’ was thick and nothing was visible in the harbor.  As I enjoyed my coffee, the fog began to lift and as it did, I noticed one of our resident ospreys sitting in the tree.  He was either one of the parents or a sibling but I guess I’d like to think it was a parent, keeping watch in the early morning before beginning his day.

I found the starkness of the osprey, tree and foreground striking against the soft fog and water and not wanting to lose the scene (sea smoke moves quickly!) by rising and getting my big camera, I snapped the image with my iPhone.   Since it wasn’t the sharpest image but still liking the scene, I post-processed the image in Topaz Texture Effects which added a soft pastel effect in the background.  Sometimes, memorable moments captured don’t have to be ideal!